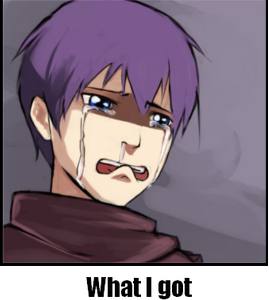 Due to circumstances, we’ll be taking June off in the blog. There may be an announcement of our next collection of works, with maniacal content.

Proofreading by The Noble Shade.

I’m pleased to announce a major update for our translation. We’ve recently been in correspondence with the Russian Paradox translation team after we noticed their use of element icons in skill descriptions. As of an udpate a few weeks ago, element icons were removed from our skill descriptions because they were causing display issues, and we were hoping to extrapolate the Russain translation’s icon use. While we ultimately did not figure that out, they have graciously given us use of their plug-ins. Similiar to plugins and modifications that already existed in the translation, such as the extended skill description box, the syntax that enables the nameboxes (aka nameplates), and the affinity display, we’ve introduced some plug-ins that provide quality-of-life improvements.

•An extension for the Monster Library that adds a status chance page, similar to the one used in your party status menu. In addition, enemy stats will now reflect the current difficulty you’re playing on.

Translation and Proofreading by The Noble Shade.

There was an update today on the dev blog, translation by Gemini Sunfall.

The leader of the Six Ancestors, and a great monster who is highly trusted by the Dark God. She bears the characteristics of lamias, harpies, and dragons, and possesses tremendous physical and magical capabilities.
Although there is no clear superiority or inferiority among the Six Ancestors’ powers, there is balance and affinity between their specialties. Saja has the greatest overall fighting ability amongst the Six Ancestors, and is known for being the strongest among them. Her power is said to rival Heaven’s most powerful angels, Micaela and Lucifina.

In the parallel world known as “Makai” ruled by the Dark God, Saja does not rule over a city. She is the confidant and guardian of the Dark God, and rarely leaves her side. The Dark God does not move from her castle on the Monster Continent, so Saja leads the Dark God’s armies as her adjutant. Saja has strict and level-headed personality, but she appears to dislike excessive cruelty. She is deeply loyal to the Dark God, and it is rumored that she could become her successor.

Saja has a strict and level-headed personality, but she appears to dislike excessive cruelty. She rapes defeated men and feeds upon them for her own enjoyment. As a yoma, it isn’t unethical for her to squeeze challengers to death. That is, she is only exercising her natural right as the victor.

※Due to circumstances, we will be taking a break from updating the blog next month.

Proofreading By The Noble Shade.